Should airlines hedge out their fuel price risk?

I. The arguments for and against an airline hedging its fuel risk

According to the Framework for Risk Management (A. Froot et.al), the key argument for risk management through hedging is to avoid cash-flow disruptions by movements in external factors, ensuring consistent and efficient investment funding to outpace competition and create corporate value. Hedging is highly appealing for airlines, due to commoditised market conditions, needs for continuous CAPEX investments, high exposure to external factors (e.g. fuel price).

Fuel is the single biggest cost for airlines. According to IATA (see table 1), fuel has accounted for 17%-35% of average airline operating costs. Fuel prices are also highly volatile. Based on 2012 data, in six months, spot prices ricocheted between $88 and $128. Thus, there is a strong case for airlines to hedge fuel risk to and avoid volatility.

Additionally, given high price volatility, experts suggest that deciding not to hedge is equal to speculating, since macroeconomics suggest a future upward pressure on oil, which would adversely impact high exposure to spot prices. There is a wide variety of financial tools (Swaps, Put/Call Options, Collars) that airlines can choose from to balance out risks. Lufthansa’s hedging, based on quantitative and mathematical techniques, has proven persistent in all market conditions since 1990. 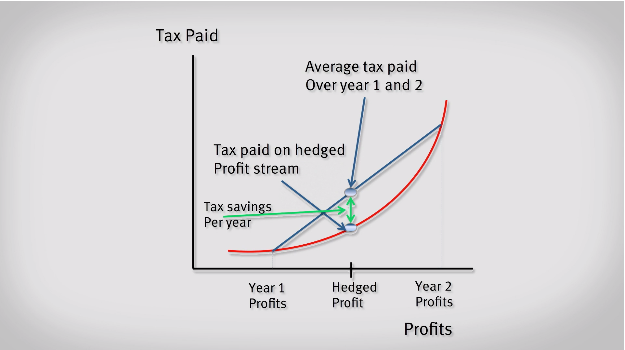 However, hedging has been criticized for resulting in a heavy toll for airlines in a declining fuel price environment. After 2008, several airlines reported losses on their hedging positions, having locked fuel prices before a major slump. In 2008/09, Cathay Pacific and Air China lost $974 and $994 million respectively.

Moreover, if not managed properly, hedging does not always protect airlines’ interests. Critics argue that counter-parties have incentives to sell under-performing hedges, turning the airline’s loss into the bank’s gain. Additionally, hedging is expensive. Per McKinsey, while direct costs are 0.1% to 0.4% of funds hedged, opportunity cost and asymmetric upside lost can bring total cost of hedging up to 10.4%.

Lastly, Delta airlines went a step further, acquiring an oil refinery in 2012, seeking competitive advantage by backwards integrating rather than hedging. However, Delta’s “Cutting out the middle man” approach was criticized for not delivering results.

II. Should Ryanair continue to hedge its fuel price risk?

As a low-cost airline (LLC), Ryanair’s profitability and cash flows are heavily fuel-dependent. Fuel costs accounted for 43% of Ryanair’s cost base in 2015, as opposed to the 24% industry average (appendix-table 1). According to CFO N. Sohoran, Ryanair is focused on creating a stable financial environment by hedging fuel requirements on a 12-18 month, rolling basis. The company has deep understanding of its hedging strategy and appears to be following a thoroughly considered approach.

However, in 2015 Ryanair reported $200 million hedging losses, because of falling fuel prices, albeit partially offset by favourable Forex positions. Currently, Ryanair has 90% of its 2018 fuel hedged at $49 per barrel and 45% at £48 for 2019, while Brent crude spot price is trading at $48 (July 2017).  According to CEO O’Leary, this enables Ryanair to reduce fares in coming years. However in reality this is a risk, as the outcome is dependent on the oil price evolution.

To decide whether to hedge or not, A. Froot et.al considered the connection between investment opportunities and economic variables. Applying this framework for Ryanair (Chart 4), if future price fluctuations are expected to be in correlation with market demand, desired airline investment is expected to be constant. In this scenario, the case for hedging to avoid underinvestment, sustaining CAPEX especially in a high-fuel-cost environment, is stronger. 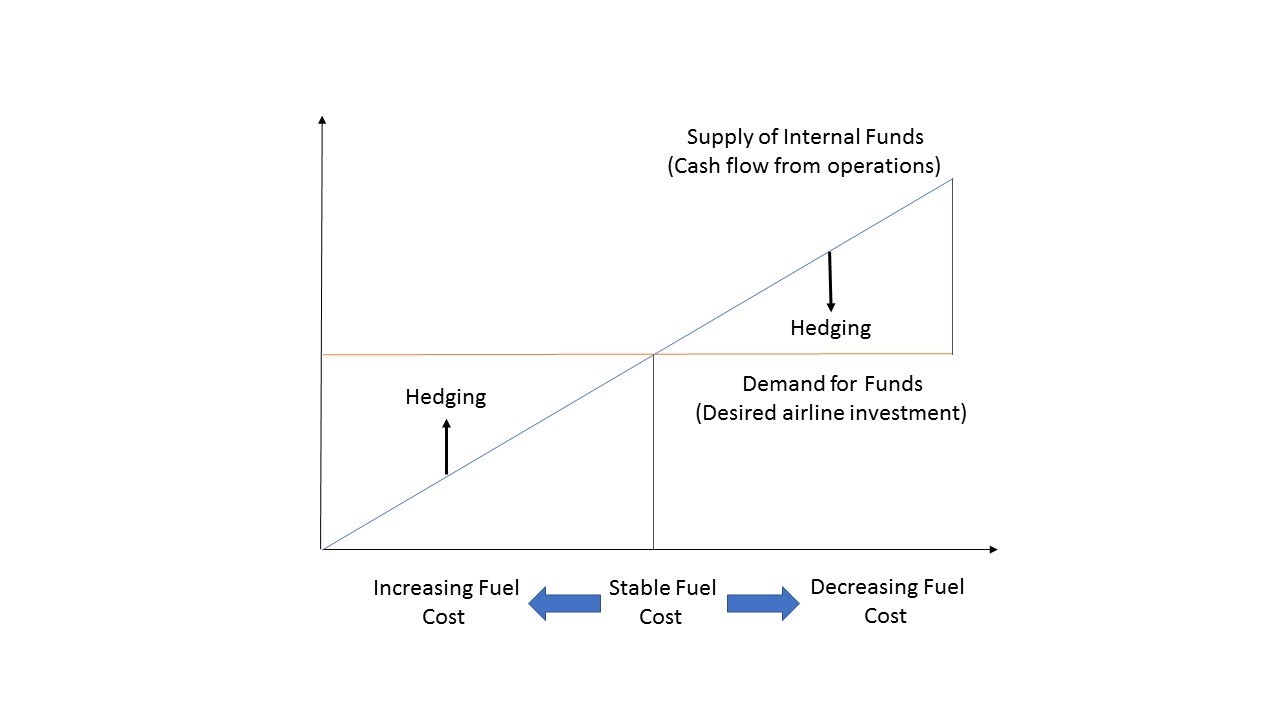 Alternatively, if fuel price fluctuations are expected to result from non-market events (chart 5), such as political uncertainty, demand for investment would be fuel-price-sensitive. In a high-fuel cost environment demand lower, reducing the need to sustain, leading to a weaker case for hedging. 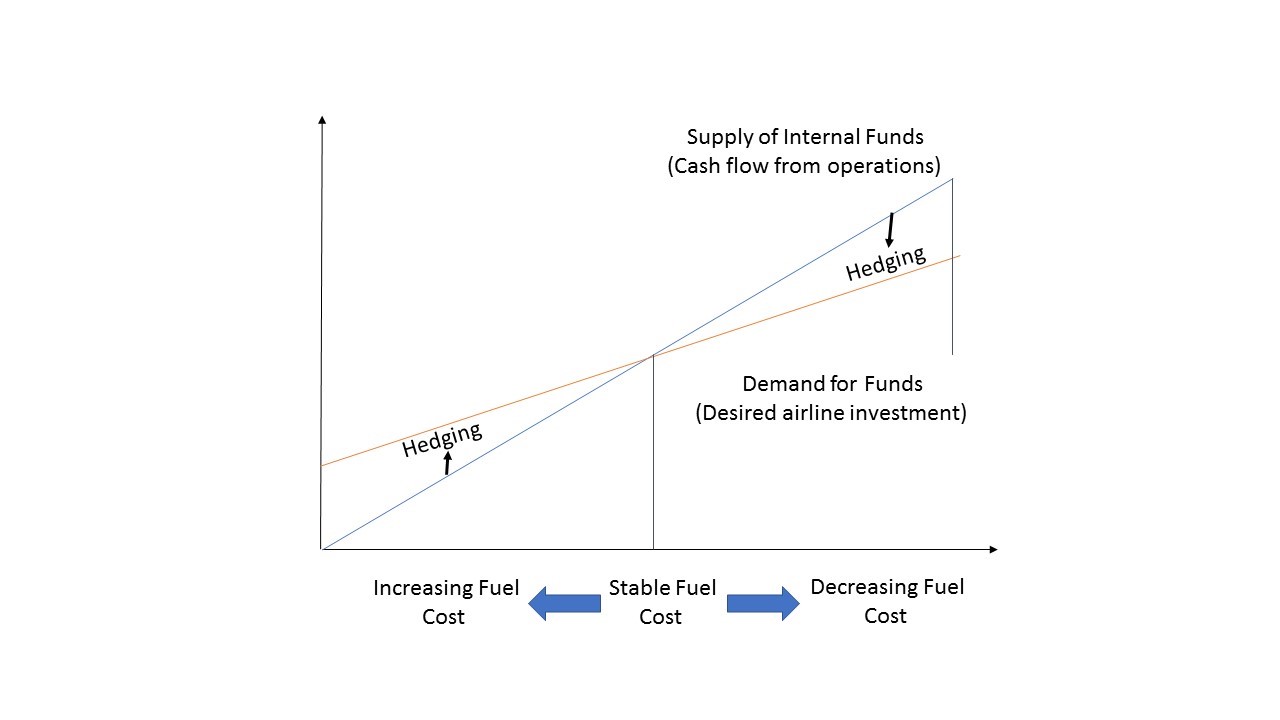 In conclusion, Ryanair has a strong hedging approach in line with competition, but with open risks in 2018/2019. Looking ahead, Ryanair should consider non-market risks, such as a combination of high fuel costs and low demand. Given the current explosive mix of political uncertainty, especially Brexit, with the potential to adversely affect key markets in Europe, Ryanair should proceed with extra caution. While it would not be prudent to outright stop hedging, Ryanair should be vigilant, considering more risk-averse hedging instruments, even at a higher premium. 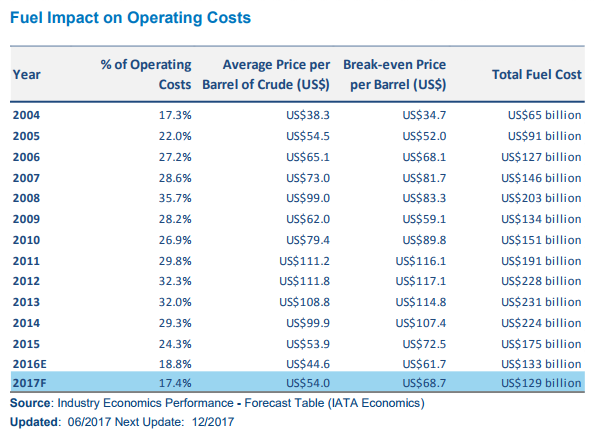